Country will be clean as a whistle shortly

A scrap metal collection – Communities hoovering up scrap metal to raise funds Keeping a local community organisation or sports club going can be a costly affair and many took to collecting scrap metal this year to raise money. GAA clubs led the way and the idea spread like wildfire because donating costs nothing for […]

– Communities hoovering up scrap metal to raise funds
Keeping a local community organisation or sports club going can be a costly affair and many took to collecting scrap metal this year to raise money. GAA clubs led the way and the idea spread like wildfire because donating costs nothing for local residents and it’s financially rewarding for the clubs.
Steel, for instance, has seen its value shoot up from €30 to €220 per tonne in less than 12 months. Portmarnock Community School collected scrap to raise funds for a project in Lesotho. Meelin GAA Club in Co. Cork also jumped on the idea. So too did Castleisland Soccer Club. The list goes on.
The first to notice the skyrocketing prices were criminal gangs and across the country they’ve stolen everything from beerkegs to bronzeworks. But in Donegal for instance, it is the GAA that is doing best from the rising prices by holding ‘Scrap Saturday’ collections.
Buncrana GAA chairman Paul McGonigle told the ‘Donegal Democrat’ that members were much happier collecting scrap than “traipsing around in the snow” to sell tickets for the Christmas draw, their traditional fund-raiser. Travel 383 kilometres south and it’s no different.
“It has become a common enough way of fundraising,” Alan Shire of Fedamore GAA Club in Co. Limerick told us. “Knockainey National School, for instance, raised over €20,000.”
His club were hoping for even a quarter of that amount, but they too found their expectations were exceeded and Fedamore brought in over €7,000.
Such a collection isn’t without its hazards, however. Criminal gangs have in the past stolen the goods after a collection. “You could say that schemes like this might draw trouble onto ourselves,” Alan said, “but the benefits outweigh the cons.”
Another obstacle for a time was GAA headquarters which initially discouraged the practice. In February, it wrote to clubs nationwide pointing out that scrap metal collections are not covered by the association’s liability insurance. Furthermore, the letter said that GAA properties should not be used “under any circumstance” for storing collected metal.
In Donegal, the local county council insisted that the clubs comply with the Waste Management Act. Fedamore, however, made sure that everything was above board before their collection on November 26th.
“We checked with the County Council, the Gardai and the County Board and we were approved,” Alan said. “We found that as long as you go with a licensed recycler and you manage to get rid of it on the day, everything is fine.”
They collected everything from old cookers, ironing boards, radiators, unwanted cars, corrugated iron, batteries and worn saucepans and to drink cans – things that most people would only throw out or bring to a recycling plant anyway.
By pure coincidence, November 19-27th marked European Week for Waste Reduction.

Ex-prisoners turning their lives around in Ferrybank 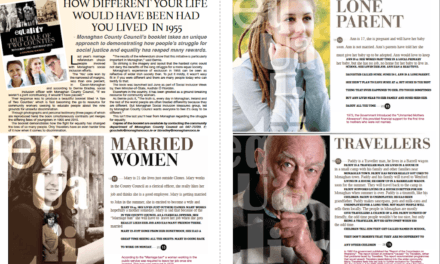