By Marie Louise Byrne 2012 is the EU Year of Active Ageing and Solidarity between Generations – a somewhat wordy title which aims to raise awareness of the fact that we are living longer and staying healthier than ever before – and to realise the opportunities that represents. Population projections indicate that by 2030 one […] 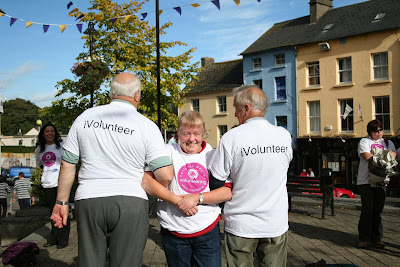 By Marie Louise Byrne
2012 is the EU Year of Active Ageing and Solidarity between Generations – a somewhat wordy title which aims to raise awareness of the fact that we are living longer and staying healthier than ever before – and to realise the opportunities that represents.
Population projections indicate that by 2030 one in five people living in Ireland will be 65 years or older. With active citizenship and inclusion at the core of his inaugural speech, President Michael D. Higgins will launch the EU Year at a ceremony in Dublin Castle on February 9th, he will be joined by Minister Kathleen Lynch, Minister of State for Disability, Equality, Mental Health & Older People and also by Minister for Children and Youth Affairs, Frances Fitzgearld.
Ireland needs people who can make a difference in their communities and many retired people have the experience, wisdom and years of learning behind them that could help make that difference.
Community and civic engagement is good for all of us, but there is evidence from social science and gerontology that it bears greater benefits for older people’s mental and physical health, supports their ability to remain living in their own homes for longer and may even slow down the progression of dementia . Those over 55 already make a huge contribution to Irish society through volunteering, arts and culture, charitable giving, voting, caring and other forms of citizenship. An important challenge exists however, both for policy makers and for the community and voluntary sector; how do we support, nurture and create additional opportunities for community participation within a diverse, ageing population?
Recent research by Brian Harvey (July 2011) found that while there is high take-up of community education opportunities by older people – in the region of 30% to 50%; courses availed of tend to be generic. Few courses empower older learners with the opportunities to develop critical thinking, advocacy or leadership skills. Older people’s organisations have traditionally demanded “cookery and computers”. In 2010 Age & Opportunity began to work on a new project which would specifically increase opportunities for older people to develop their self-confidence, critical thinking and capacity for advocacy and contributing to decision making processes.
As part of this project members of Gorey Active Retirement Group in north Co. Wexford are now embarking on a unique eight week community development course, supported through the LCDP, which is aimed at developing their skills as active citizens, community organising, influencing policy and working together to address problems in their local community.
Madge Crowe the Hon; Secretary of Gorey Active Retirement Group is delighted that the group was selected as one of only eight areas in the country that will be participating in the On TRACk – Turning Retirement into Active Citizenship, pilot training project, which is being developed specifically for older people who want to contribute to their communities after retirement.
Having already completed courses such as Ageing with Confidence and Media Awareness with Co Wexford Age Equality Network as well as Introduction to Email & Internet with Co Wexford VEC, this group is more than eager to continue on their learning journey. This training will focus on skills such as leadership, working together as a group, community organising and analysing issues to solve problems. Madge herself, has already begun to use her recently acquired media skills by going on local radio to promote the training and to outreach on behalf of the group.
The Gorey group initially got involved in the project through Co Wexford Age Equality Network, which is an alliance of over 40 older people’s groups and individuals from across Co. Wexford who come together on a regular basis to share information, campaign on older people’s issues and run events or training. The Network is supported by Wexford Local Development’s Get Vocal programme, which aims to strengthen the voices of older people and support them to engage in policy development and decision making processes. Get Vocal is Age & Opportunity’s flagship community development programme that works with different organisations throughout the country. It is rolled out locally through a number of LDCs including WLD, Co. Wicklow Partnership, Breffni Integrated and Kildare Leader Partnership. Funding for the national programme comes from Atlantic Philantrophies.
At the core of all Co Wexford Age Equality Network activities are the principles of community development which are particularly relevant to older people who so often suffer from dependency stereotyping and ageist attitudes. The Network is entirely led by older people with support from a part-time development worker who is employed by WLD. It is a vibrant grass-roots organisation.
Wexford Local Development is supporting and delivering OnTRACk as an action under Goal 4 of the LCDP in collaboration with Age & Opportunity who are the national organisers. Two experienced local facilitators, are undergoing specialised training with Community Action Network and Age & Opportunity in order to deliver the course locally. WLD will be working closely with the 17 participants in Gorey throughout the course, to ensure that everyone gets the chance to use their energy, skills, knowledge, spirit of self-help and experience for the benefit of the entire community in Gorey town and the surrounding rural hinterland.
The training will take place in Gorey Adult Learning Centre and will start on Thursday, February 2nd, continuing each Thursday for 8 weeks.
More info from  Marie Louise Byrne, WLD, 053 9155864 and from Madge Crowe, Gorey ARA, 087 7674443 – madgecrowe@gmail.com

Alignment in more detail: The role and functions of Socio-Economic Committees

How to get the digital edition of Changing Ireland