By Hilary Dilworth and Phil Shanahan Residents of Cooleen’s Close in Clonmel town, Co. Tipperary, have banded together and forged a new community pride in the area by retaking waste ground, entering organic gardening and opening the door to outside support.  Upon getting organised, the residents realised there were many more agencies and supports available to […] 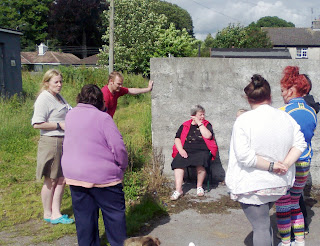 By Hilary Dilworth and Phil Shanahan

Residents of Cooleen’s Close in Clonmel town, Co. Tipperary, have banded together and forged a new community pride in the area by retaking waste ground, entering organic gardening and opening the door to outside support.
Upon getting organised, the residents realised there were many more agencies and supports available to them than they had been aware of.

The authors of this article – staff with South Tipperary Development Company – say the company is “proud” to have supported the model of engagement they outline below and predict it will have “far-reaching and long-term positive impacts for individuals and the community as a whole” in Cooleen’s Close.

The Local and Community Development Programme is the conduit for engagement between communities and local services, often acting as the architect that facilitates and enables communities to achieve their objectives and goals. A strong example of this in action in South Tipperary is the Cooleen’s Close Field Project, supported through the LCDP by South Tipperary Development Company (STDC).

Cooleen’s Close is one of the RAPID estates in Clonmel. The estate experiences a number of systemic problems, including: a lack of engagement in community structures; a lack of community and youth facilities; high levels of anti-social behaviour; high unemployment; and low education and skills levels with little engagement by the community in training and education opportunities.

The initial engagement between Cooleen’s residents and LCDP staff in June last year focused on an overgrown and neglected field at the back of the houses that had become a site for anti-social behaviour. The residents had become despondent and disillusioned with what they felt was indifference to this issue by key service providers.
Nevertheless, through support by the STDC and people on placement through the Tús Programme, the whole field was transformed into a space that included a community allotment, memorial garden, skittles area and a community cabin which will act as a centre for community activities.
In achieving this transformation, the community was facilitated to engage and work with key statutory and community services including Clonmel Borough Council, RAPID, the HSE, Clonmel Community Based Drugs Initiative, Tidy Towns, South Tipperary VEC and the Department of Social Protection.
While the project has seen great mobilisation by the community, it has also developed confidence levels to the extent that the possibilities are now limitless for this community. They are now engaged fully with the services that will enable them to further their plans for their estate.

LEARNING ABOUT ONE FROM ANOTHER

For example, going back and forth to meetings, Mary Lawlor, a resident of Cooleens Close, found “there there is a lot more out there” in terms of agencies and organisations willing and able to lend support.
“We are learning because one agency (gives) us information on another agency that we didn’t know about and then we go talk to them.”
Agencies and services that engaged with the community through this project have reported that engagement levels have notably increased between them and this community, collectively and individually:
“We’ve had contact from other Cooleen’s Close residents since the project started,” remarked an official from the Department of Social Protection. “It gave them confidence to come along and re-engage with us more than they have done previously.”
“They have a better relationship now with the corporation in Clonmel and with other agencies,” said Richard Wood, Tús Team Leader.
While the focus of the Cooleen’s Project was on community development, the broad outcomes and achievements are reflected across the four Programme Goals of the LCDP.

• Authors: Hilary Dilworth is LDCP Development Worker and Phil Shanahan is LCDP Manager with STDC. Student, Claire Turner, while on placement with the company, compiled a case-study on Cooleen’s Close that helped form the basis for the above article.