Pobal conference: Varadkar responds to criticisms from the floor 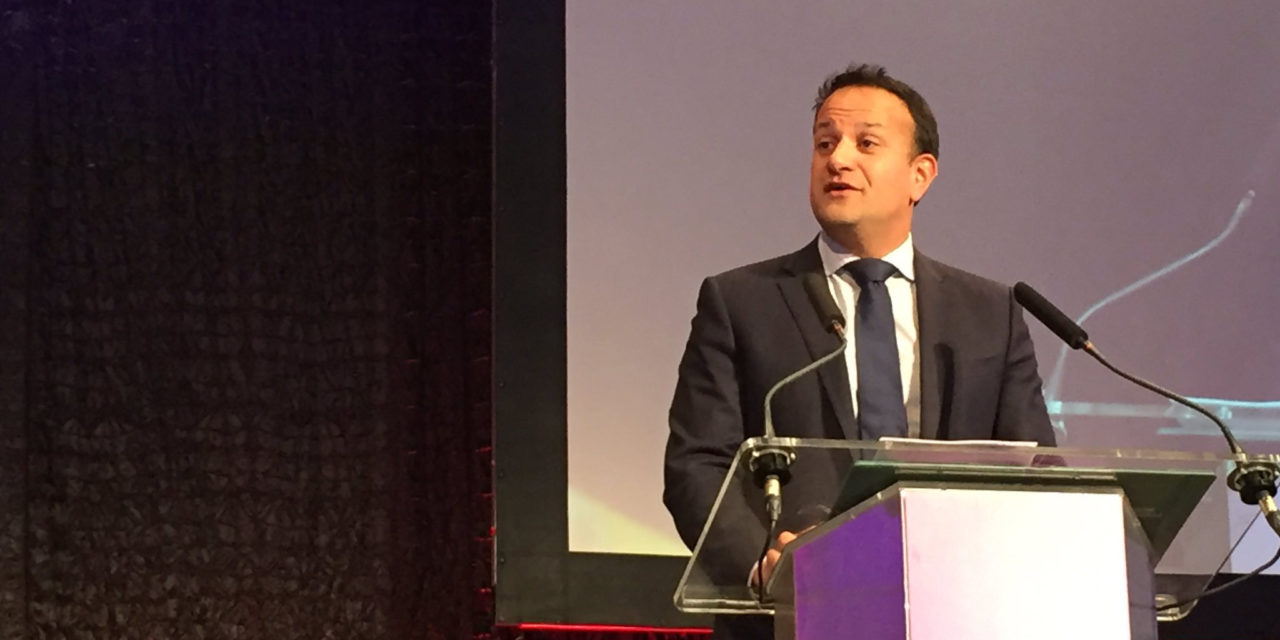 At Pobal’s annual conference, Minister for Social Protection Leo Varadkar and Philip O’Connor of the Geary Institute addressed the concerns of attendees.

The 2016 annual Pobal conference was held in the Helix, on Dublin City University grounds, the day after the world learned that Donald Trump had won the US presidential election.

Given the platform on which he stood and how he tapped into alienation among the working poor and those on the margins, Pobal’s conference theme – Creating an Inclusive Labour Market – was apt.

Unemployment in Ireland had fallen to 7.2% by January of this year (2017), 0.1% lower than in November 2016. However, unemployment remains high for groups such as refugees, Travellers and people with low levels of formal education, and people who have been unemployed for more than three years (termed ‘very long-term unemployed’) face considerable barriers.

The audience and participants at the Pobal conference, as well as the many guest speakers, identified barriers and sought solutions to make employment opportunities more socially inclusive.

The debate was lively. Ken Loach’s heart-breaking movie I, Daniel Blake was mentioned by a speaker from the floor. The movie is about an unemployed man struggling to get social welfare supports. Minister for Social Protection Leo Varadkar had been to see it:

“I’d recommend anyone to go see it. I’d like some of my staff to go see it too, to get a different perspective as to how a person can interact with our department and how sometimes engagements can be very meaningful.”

He added, however, that he could imagine a “counter-movie that might provoke our customers”.

Pointing out that he is only the second Fine Gael member in 60 years to hold office in the Department of Social Protection (or in its earlier manifestations), the Minister said: “I’m a strong believer in the contributory principle. If people pay into the system, they should benefit from it.”

He highlighted progress on “encouraging self-employment and entrepreneurship,” such as the extension of more social protections.

The most important area of his work, he said, was “moving people from welfare into work,” and “creating an inclusive labour market is part of that.” Over five years, the department aimed “to move 100,000 people from welfare to work,” said Minister Varadkar. “But, while the numbers who are unemployed are falling every month, we’re actually seeing the number of people unemployed for more than five years increasing,” he acknowledged.

“As unemployment falls, the cohort of people who are unemployed are harder to reach and it requires much more focused interventions than we have at the moment,” he said.

Minister Varadkar referred to barriers such as the lack of transport (particularly in rural areas) and costs. “Obviously, childcare is an enormous barrier,” he continued, drawing attention to the government’s initiative to subsidise childcare.

Plans for 2017 he pointed to included:

– Making it easier and quicker for people to access the Back to Work Enterprise Allowance.

– Engaging employers to increase their awareness of grants to support them in employing people who are long-term unemployed, who are young and unemployed, or who have a disability.

The Minister also spoke about the Action Plan for Jobless Families, JobPath, Gateway and the importance of services delivered through CE and Tús. On intergenerational unemployment, he said, “any intervention is going to have to be holistic, and expensive too, but if we’re serious about doing this we’re going to have to do it properly.”

Questions from the floor included one from a community worker from Kerry which resonated with the audience.

Dee Keogh, a Jobs Club co-ordinator in Castleisland, said, “I work with a lot of 45-year-old skilled males who are course-weary, tired of CE schemes, and of hearing there’s a job out there. They might do a Tús scheme – it lifts their morale and confidence for a time – but afterwards they come asking me what will they do next.”

She said more than two funded ‘interventions’ should be allowed for each individual. She said that it can take community workers up to eight (often voluntary/unofficial) meetings with individuals to lift their courage and confidence to be ready for one of the formal interventions, such as joining a course or applying to a scheme.

She called for a new Tús Plus scheme: “I have people who’ve worked in a charity shop for a year through Tús and, when they’re finished, they go and do another scheme for free because they just want something to do.

“There’s no jobs where I live in Castleisland. Check it out yourself – we’ve no bus service, no wifi. And, no disrespect, but these men don’t want to do computer courses; they want work. Real work,” said Dee.

From Dublin, a Simon Community worker called Tracey endorsed the Kerry contributor’s views, adding: “We need to measure the quality-of-life impact of our work on people who are homeless, who have disabilities, who are third-generation unemployed, to see the impacts that don’t show up in cost-per-head or regional analysis.”

Minister Varadkar replied, “I totally hear the point you make about course fatigue and scheme fatigue, and spending years going from course to scheme to welfare, and that’s not a success.

“I’m always open to new ideas, including a Tús Plus, or people spending longer on CE, but I don’t think we should see it as a success if somebody spends three instead of two years on CE.

“But, bear in mind, all of this is paid for by taxpayers, who go out and work every day, who maybe aren’t in their dream job or ideal job, but go to work to earn money for their families and themselves – and pay taxes – and they have a right to raise questions if somebody is saying, ‘I’m not going to take a job because it’s not suited to me, or I don’t like it. It’s not the job I want and, by the way, in the meantime you should pay for me’. We can’t have that,” he said.

Addressing the point raised by the Simon worker, he said, “of course we should take into account the quality of life and the impact any intervention we make has on a person,” said Minister Varadkar.

Work still to do

Philip O’Connell of the Geary Institute said he too shared the concerns expressed from the floor. “Recovery has seen the growth of a substantial group with multiple disadvantages who stay unemployed for very long periods,” he said, citing age, skill-levels and education among the determining factors.

He credited the Social Inclusion and Community Activation Programme with playing a role in reducing the levels of very long-term unemployment. He spoke about a “rationing of services” available through the government’s Pathways to Work, and said socially excluded groups such as ex-offenders should be better supported.

Calling for a range of measures, he said, “as unemployment falls it becomes necessary and possible to adopt more inclusive client-centred investment in employability of all with the capacity and desire to work.”

Meanwhile, Donald Storrie of Eurofound, an EU agency promoting better social, employment and work-related policies, spoke about the employment challenge facing refugees, noting that 4,000 people from Syria and other war-torn countries are due to arrive here. “They’ll be traumatised and far from the labour market,” he said. “Unlike labour migrants, they are not labour-market ready,” he said. Looking at Sweden’s experience, he said migrants and refugees “do catch up after many years, but for women it’s a big catch-up.”

He pointed people to the latest Eurofound research paper for more information on the best approaches.

Six workshops – on co-operation, social enterprises, employers, work and homelessness, the ‘Activation Agenda’ and the role of local authorities – took place during the conference to identify key learning points from experience to date.

The second examined the performance of local authorities, and local and community development committees, in supporting employment activation and broader economic development. It also looked at the impact of local economic and community plans.

The fourth workshop heard how employers can engage with employment services to create local job opportunities for disadvantaged groups.

The fifth highlighted integrated approaches to supporting people at risk of homelessness in finding work.

The sixth workshop discussed the value of apprenticeships and how they operate locally. 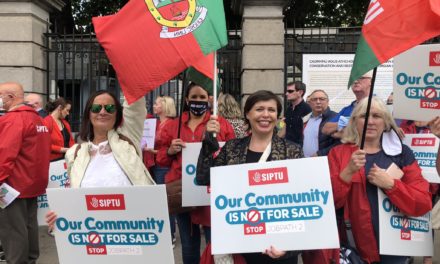 “Our communities are not for sale” 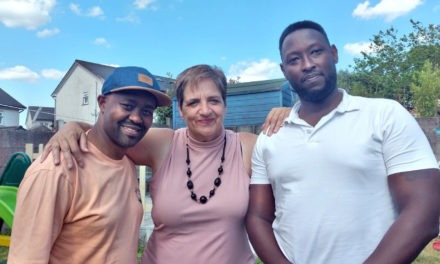 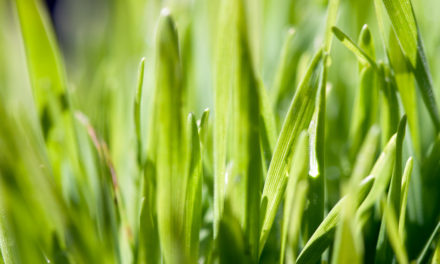