•Tom Douglas, who worked all his life as a deep-sea diver, tends to the pear tree in Killarney Men's Shed•

Has Killarney Men’s Shed got Ireland’s biggest pear tree? Show us a bigger one then!

Plus – the five magical steps you need to take to open a Men’s Shed.

They’re a bit fruity down in Kerry, but that’s not news to anyone outside the Kingdom.

Now they have reached new heights in terms of fruitiness as Tom Douglas and his colleagues from Killarney Men’s Shed, one of the oldest and best sheds around, have grown a pear tree that towers above the heads of admiring onlookers. Apart from specimens in botanical gardens in Dublin and Belfast, it is probably the biggest pear tree in the country. 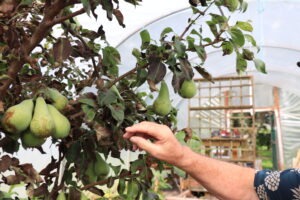 “They said five years ago that it couldn’t be done,” said a beaming Tom as he led me into the polytunnel. That day it was 32 degrees celsius outside and even hotter inside. Tom pointed to the dry earth and to leaves turned brown and tut-tutted that his colleagues hadn’t watered their pride and joy. And so we set to work in close to 40 degrees heat to replenish its roots.

“My wife makes pear tart and the boys go bananas for it,” said Tom.

As mentioned, they really are a bit fruity in the Kingdom. Keep watering that tree and we’ll be down next year! 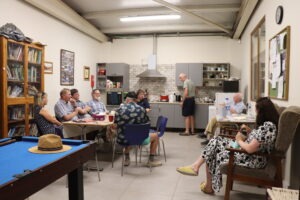 Killarney Men’s Shed has the coolest kitchen canteen and pool room in the country, probably!

It was set up in 2012 by former chair Tom Douglas and others from the local area with support from South Kerry Development Partnership.

It is located in a former box factory where the men have built workshops, activity rooms and a comfy kitchen café, while outside are well-tended grounds.

If you’re wondering how to set up a shed, the Irish Men’s Sheds Association (IMSA) says there are five steps a group needs to take.

STEP 5: Plan and register with the IMSA. 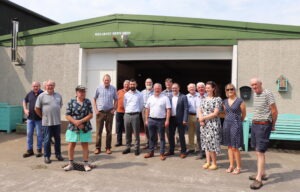 Outside Killarney Men’s Shed: members and community workers who support the project with Minister of State Joe O’Brien.

HUNDREDS OF BUSINESS STARTS AND JOBS YOU DON’T KNOW ABOUT