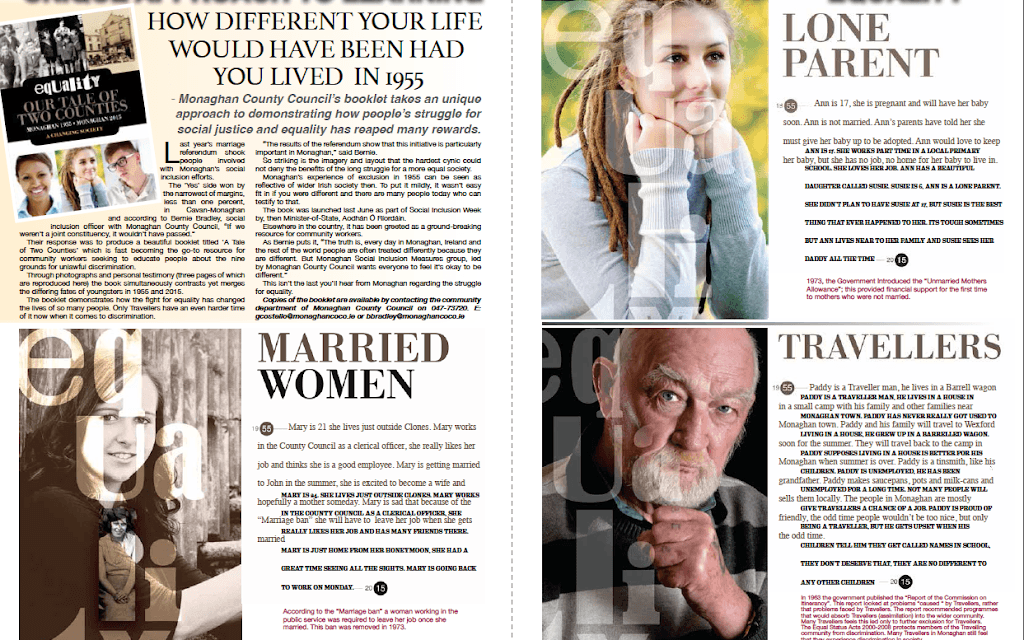 Compare how different your life would have been had you lived  in 1955 – Monaghan County Council’s booklet takes an unique approach to demonstrating how people’s struggle for social justice and equality has reaped many rewards. Anyone in Ireland today would find it useful to give them perspective in the struggle for equality. Click here to […]

– Monaghan County Council’s booklet takes an unique approach to demonstrating how people’s struggle for social justice and equality has reaped many rewards. Anyone in Ireland today would find it useful to give them perspective in the struggle for equality.

Last year’s marriage referendum shook people involved with Monaghan’s social inclusion efforts.
The ‘Yes’ side won by the narrowest of margins, less than one percent, in Cavan-Monaghan and according to Bernie Bradley, social inclusion officer with Monaghan County Council, “If we weren’t a joint constituency, it wouldn’t have passed.”
Their response was to produce a beautiful booklet titled ‘A Tale of Two Counties’ which is fast becoming the go-to resource for community workers seeking to educate people about the nine grounds for unlawful discrimination.
Through photographs and personal testimony (three pages of which are reproduced here) the book simultaneously contrasts yet merges the differing fates of youngsters in 1955 and 2015.
The booklet demonstrates how the fight for equality has changed the lives of so many people. Only Travellers have an even harder time of it now when it comes to discrimination.
“The results of the referendum show that this initiative is particularly important in Monaghan,” said Bernie.
So striking is the imagery and layout that the hardest cynic could not deny the benefits of the long struggle for a more equal society.
Monaghan’s experience of exclusion in 1955 can be seen as reflective of wider Irish society then. To put it mildly, it wasn’t easy fit in if you were different and there are many people today who can testify to that.
The book was launched last June as part of Social Inclusion Week by, then Minister-of-State, Aodhán Ó Ríordáin.
Elsewhere in the country, it has been greeted as a ground-breaking resource for community workers.
As Bernie puts it, “The truth is, every day in Monaghan, Ireland and the rest of the world people are often treated differently because they are different. But Monaghan Social Inclusion Measures group, led by Monaghan County Council wants everyone to feel it’s okay to be different.”
This isn’t the last you’ll hear from Monaghan regarding the struggle for equality.

Copies of the booklet are available by contacting the community department of Monaghan County Council on 047-73720. E: gcostello@monaghancoco.ie or bbradley@monaghancoco.ie

The pipes are calling to promote a thriving industry

VIDEO REPORTS FROM ‘CLAIMING OUR FUTURE’