Working on a shoestring budget, sustained by tea bags, mars bars and a good sense of humor, Borrisokane Community Forum is doing what was done by paid local community workers until recently. “Volunteers in Borrisokane are showing that a huge amount can be achieved by local people working together,” said forum chairperson Miriam Lewis and […] 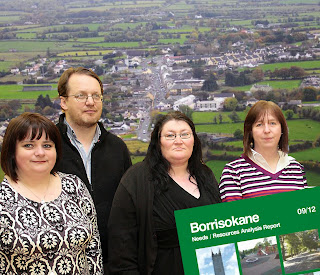 Working on a shoestring budget, sustained by tea bags, mars bars and a good sense of humor, Borrisokane Community Forum is doing what was done by paid local community workers until recently.
“Volunteers in Borrisokane are showing that a huge amount can be achieved by local people working together,” said forum chairperson Miriam Lewis and fellow-volunteer Catriona Lennon.
“But such volunteer effort is not a limitless resource. There needs to be more hands on support for initiatives such as ours. The State can’t just pull the plug on community development in local communities.”
“The €1,346.20 spent by the Taoiseach’s Department on tea and coffee in one month would finance this hard working group for at least 3 or 4 months” said Miriam.
– In the absence of a full time community worker, volunteers in Borrisokane are doing it for themselves
Two years back, Borrisokane Community Forum featured in ‘Changing Ireland’ shortly after a pair of volunteers got the ball rolling. Miriam Lewis and Catriona Lennon have pulled together a strong volunteer group.
Here, they tell us how it’s been:
Things have changed a lot. We established a presence on social media to raise our profile and we held our first AGM. We’re all local people who care for and want to make a difference in the community.
The whole process of getting things up and running has been very interesting and if it wasn’t for phones and e-mail, it would have been very slow. Sometimes, we wanted to pull our hair out, but we never gave up.
With the help of North Tipperary LEADER Partnership (NTLP) we took on a member of our group Donna McLoughlin for nine months through the Jobbridge scheme and NTLP let us use their rural transport office for our operations. Following a hugely successful year, Donna remains a committed volunteer member of our group.
In the early stages, a lot of Donna’s and the group’s time was spent on a local needs/resources analysis. We conducted surveys among all local community groups and businesses and afterwards held a public meeting in Borrisokane. Over 70 people attended and groups that emerged from that night acted as catalysts in setting up Borrisokane Food and Craft Market, Stella FM Radio and Borrisokane LocalSwitch Association, among others.
RTE’s Operation Transformation leader Gregg Starr joined town mayor Darragh McKenna to launch our Needs/Analysis Report in March last year. The report contains results from the survey and local consultations, census information and recommendations to direct the community over the next few years. A copy is available from https://bit.ly/17dnD86.
Last September, a Jobs Fair initiative was organised in co-ordination with Borrisokane LocalSwitch Association and NTLP. As a result, 15 local people joined a ‘Start Your Own Business’ course.
WORK PLACEMENTS
Work placements have been a great help to us. Apart from Donna, we had two ladies on work experience – Sheila Comerford, from Roscrea Colaiste Phobal, worked with us on the volunteer-run After-School Club, while Wendy Hodgins on a student placement from LIT (Tipperary) also worked with the Forum.
Transition Year students from the local community college also help out at the After-School Club, with one doing so as as part of An Gaisce Awards.
In January of this year, after a long wait, NTLP facilitated us in getting a TÚS worker. We got Pamela Burke – a wonderful local girl who has transformed our group. She brings with her a supply of stress busting and anger diffusing Mars Bars for the tea-break.
LOCAL TRAINING
We were able to offer family cookery classes and computer classes for beginners, in conjunction with the local VEC adult literacy co-ordinator, Liz Flannery. All were over-subscribed.
A personal finance course was run through the VEC’s Life-Long Learning Centre with encouragement from local community college principal Matthew Carr and we’ve organised a beginners painting course and a quilting group through the local library.
NTLP funded specialised training to upskill our volunteers, including FETAC Level 5 in After School Childcare, Children First Child Protection, Resilience in the Community, and first aid.
Also this year, we held our first AGM and elected officers.
Long term, we hope to move into the town’s disused former courthouse which could be used as a base for the Forum and for other local community groups.
E: borrisokanecommunityforum@hotmail.com
W: www.borrisokane.com
Borrisokane Community Forum is also on Facebook.

Country will be clean as a whistle shortly

LIVE-BLOGGING FROM CITIZENS’ FORUM IN NENAGH