A course in Clondalkin, that is that is also delivered in six other by other communities in Dublin, is teaching people to cook for themselves at a time when the diets of disadvantaged groups are disimproving. The breakfast roll, now part of male Ireland’s dietary landscape “It’s a peer led programme where local people are […]

A course in Clondalkin, that is that is also delivered in six other by other communities in Dublin, is teaching people to cook for themselves at a time when the diets of disadvantaged groups are disimproving.

“It’s a peer led programme where local people are trained to run the course” said Liz Griffin, project co-ordinator of ‘Healthy Food Made Easy’ “it takes people back-to-basics”. “It takes people back to basics and is fun and practical”.

People’s diets are narrowing thanks to the recession, according to a national report by ‘Safefood’ published on November 2nd and the most at-risk groups are young single men and low-income families with children, especially one-parent families.

Currently, says the CSO, 14% of Irish people are at risk of poverty, while the figure among the unemployed is 33%, among lone parents is 35% and among children is 18%. With less money in their pockets, people are prioritising value over nutrition, and as a result, their health is suffering.

The best way to tackle this problem is through education – to show people that they can make unexpensive meals that are also nutritious, as the course in Clondalkin succeeds in doing. The six-week health programme has been running since 2004 through the CPLN area partnership.

The programme attempts to alter people’s behavior: “We consistently promote the food pyramid. We give people recipes, show them how to prepare food, and get them to taste it.

“In the fifth session, a dietician from the health promotion service comes for a Q&A session. It’s available to all community groups in the CPLN are, and there are similar programmes in Ballyfermot, Coolock and Blanchardstown.”

The course has been extended over the years to Palmerstown, Newcastle and Lucan, and recently become available in parts of Tallaght.

Note: Safefood is a North-South organisation that works in four key areas: education, research, nutrition and communicating with consumers. 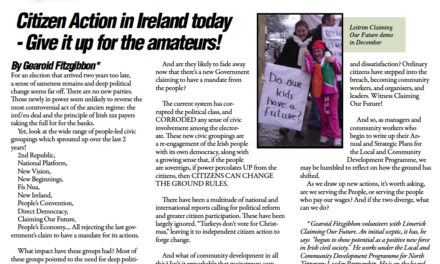 WHAT NOW FOR CLAIMING OUR FUTURE, 2ND REPUBLIC, ETC?