It’s time to measure the value of volunteering

Conor Hogan –       EU Year of the Volunteer report BY CONOR HOGAN It has been said that for every euro spent towards volunteering, the yield is between €5 and €8. Such arithmetic is crude, however, for in reality they are priceless for those who need their help.  Perhaps then there is some karma in the […]

BY CONOR HOGAN
It has been said that for every euro spent towards volunteering, the yield is between €5 and €8. Such arithmetic is crude, however, for in reality they are priceless for those who need their help.

Perhaps then there is some karma in the fact that altruism is good for you, as a US report published in 2007 found that volunteers have greater longevity, higher functional ability, lower rates of depression and less incidence of heart disease.

As well as its health benefits, volunteering is also a definite way to express a person’s active citizenship. “With our sovereignty in this country currently compromised, volunteering is a way of making yourself involved in the decision making process,” Dr Yvonne McKenna of Volunteer Ireland told us.
Despite all these positives, only about a quarter of the European population gives of their free time to help others. It is thought that the Irish participation rate is below the European average, although no national volunteering records are kept.

“In the 2006 census,” said Ms McKenna, “one in six people ticked the box to say they were volunteers. Currently we don’t know what the figure is, as there wasn’t an option to say you were a volunteer in last year’s census. Most countries in Europe keep a record of the number of volunteers, and this is something we really have to do. If the figures aren’t counted, it doesn’t count.”
As well as the need for a record to be kept, it is important, not only that we make efforts to encourage the practice of volunteering, but to commemorate the selflessness of those who do. The Ireland Involved Awards, for instance, which took place on December 5th, honoured the work of volunteers across the nation. This year has also been declared ‘European Year of the Volunteer’ by the EU and local volunteer events were organised in every county and indeed country.
A European volunteer ‘Roadshow’ toured Ireland in August – 70 Irish organisations took part. “We held three volunteer roadshows,” Ciara Herrity of Volunteer Sligo said, “and we held a week of activities, most of them events to recognise the contribution of volunteers in the lead-up to the National Day of Volunteering on September 30th.” Over 8,000 people took part in community and charity events across the country on that day.
“From my own experiences in Sligo,” Ms. Herrity said, “participation rates seem to be quite good. We advertise through our database of people and local community notes and don’t find it difficult to get people involved.” She too bemoans the governments decision in the last census not to add an option for people to identify themselves as volunteers, as she believes the numbers volunteering have increased in the last five years.
“It would be very interesting if we could note a trend or pattern,” she said, “though without the statistics we don’t have any hard evidence.” With that in mind, let’s hope the European Year of the Volunteer leads to a continued increase in participation rates. We won’t know however if we don’t keep count!
*Note: Volunteer Ireland is a new organisation born from the merger of Volunteering Ireland with Volunteer Centres Ireland. The LCDP supports 25 volunteer centres around the country and all Local Development Companies support and promote volunteering. 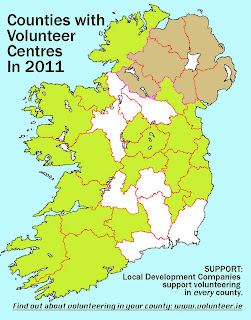 Worklink: another volunteer-led support for job-seekers