The Local and Community Development Programme (LCDP) was instigated at the beginning of this year and most CDPs – we don’t yet know the final tally – are on schedule to amalgamate their work with that of the Local Development Company in their area by year’s end. At the same time, quite a number of […] 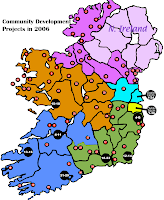 The Local and Community Development Programme (LCDP) was instigated at the beginning of this year and most CDPs – we don’t yet know the final tally – are on schedule to amalgamate their work with that of the Local Development Company in their area by year’s end.

At the same time, quite a number of projects proposed alternative models and negotiated successfully in a number of instances with the Department of Community, Equality and Gaeltacht Affairs.

The 2011-2014 budget is of course going to impact on funding for the LCDP. The extent of the cut has not been published, but an overall cut of €8.7m is planned under the subheading ‘Developing Communities’ (which includes funding towards the Programme, volunteering initiatives and “supports for the community and voluntary sector”).

Meanwhile most of the 160 CDPs are on course to fully or partially amalgamate with the Local Development Company in their area/county, with the following exceptions applying:

From the outset, 13 projects with special responsibility, national roles or providing unique services were allowed to continue independently. ‘Changing Ireland’ was among them and is the only one that needed to establish itself as an independent not-for-profit company, which it is doing. Other examples include the Men’s Development Network.

In counties Cork and Kerry, where there are over 20 CDPs, five of them are moving to HSE funding and will not be part of the LCDP, but will continue in existence.

In Dublin, where funding was withdrawn to the Dublin Inner City Partnership and amalgamation therefore became impossible, the CDPs will continue to operate with direct support and funding from the LCDP via Pobal.

Six CDPs in Limerick city are amalgamating to become one company, to be known in future as Limerick City CDP.

Note: Documentation on how the plan to amalgamate Limerick CDPs was published on our website during the summer.

17 Women’s CDPs are amalgamating and will operate as one company under the LCDP.

(For more on this, you can read Elva O’ Callaghan’s account in the upcoming edition of ‘Changing Ireland’, out in a matter of days. Elva works with the National Women’s Collective which is central to the merger).

The Traveller CDP Network (representing 17 Traveller CDPs) has recently submitted revised proposals for integration of Traveller CDPs within the LCDP. Two different alternative models are proposed and the Traveller Network has asked that both are given equal consideration. It is expected that a decision will be made on the preferred model shortly.

A small number of (mostly large) CDPs, many of whom receive 85% or more of their funding from sources other than the LCDP may continue to operate, though under new arrangements (still being negotiated) as part of the LCDP.

Some projects have declined to become part of the Programme and will continue on independently as local community development projects.

A full list of where each CDP is now, depending on the path chosen, will be published in the next edition of ‘Changing Ireland’.

We are still gathering information relating to island CDPs and will update you when we have news.

CAPTION: Our map shows the national spread of State-funded CDPs in 2006. Click to enlarge.

DAIL DEBATE ON ‘STATUS OF CDPs’ (Nov 3rd)
For a November 3rd debate in the Dail on the “Status of Community Development Projects’ (click here for the report).
Minister Pat Carey responded that day to questions from Fine Gael TD Paul Connaughton, FG’s Frank Feighan and Labour’s Jack Wall. At that stage, three CDPs were going it alone and were not joining the Local and Community Development Programme.
The Minister argued with the opposition party TDs saying the Programme would result in “enhanced” community development across the State and would not see a decline in such activity.
He further said that CDP staff should not worry about losing their jobs and said the emphasis was on frontline services such as they deliver: “I recognise the concerns of those who may feel their jobs are under threat. They are not. The people key to this are the recipients of the services and the volunteers driving it.”

Students “Stand Up!” to homophobic bullying

Community centre for sale in Galway