Helen Callan By Helen Callan From Townspark, Navan, Co. Meath, Helen Callan, who is now in her 50s, volunteers with young people at risk of drug addiction. She was 40 when she returned to school and she wrote this article “to encourage some of your readers to bite the bullet themselves”. It’s most apt as […]

By Helen Callan
From Townspark, Navan, Co. Meath, Helen Callan, who is now in her 50s, volunteers with young people at risk of drug addiction. She was 40 when she returned to school and she wrote this article “to encourage some of your readers to bite the bullet themselves”. It’s most apt as we celebrate the European Year for Active Ageing and Solidarity between Generations:
I left school at 14 with no qualifications.  I had to mind the house and my brothers and father. To be honest, I was really the woman of the house from the age of 10. My mother had died when I was 5.
Later I got married. I had 6 children and after 15 years my marriage broke down. My whole life revolved around my children and my house. I was a mammy, beginning, middle and end.
As the kids began to get older, I was asked to get involved in a local women’s group, which taught cooking and sewing. It got me out of the house and I enjoyed it. This led to taking part in other family related courses like parenting, personal development and confidence building. At this point any courses I was doing were to benefit my children. At the time, Helen as an independent person didn’t exist. All the skills and knowledge I was learning were all put to use improving life for my children.
As time went on the children grew up. A second relationship failed and I began to look at the reasons why I was making bad personal choices. I had come to the stage where I had to start caring for and working on myself. Now was my time. I got involved in the local community project, got a training place in Navan Traveller Workshops and started taking a Parent to Parent Course.
Parent to Parent educates parents on drugs and how to talk to their children about drugs. I got on so well I became a facilitator and set up a local group where parents could find a safe and confidential space to discuss how drugs were affecting their families and offer them the opportunity to listen and learn from each other.
Looking back at the unsure and uneducated housewife all those years ago, did I ever think she would have grown so much in confidence and knowledge? Did she ever think that she would be leading her own support group for parents and be playing a active role in the community and voluntary work in her town?
I was only starting out.
“I was no longer the scared housewife stuck at home with no confidence and no skills.”

Learning to drive at 50 was a huge achievement for me. I could go anywhere I wanted. It was further proof I could accomplish anything I set my mind to.  The amount of women in my area who took to driving for the first time after they seen me in my car was amazing. It was proof that I wasn’t the only one benefiting from my new confidence. 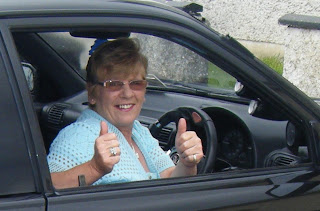 Like many of my generation, circumstances when I was young took my out of education. Even during the time I spent building up my confidence on courses and sitting on committees, there was always something in my head holding me back. Being a dyslexic didn’t help.
The paid jobs I picked were manual, cleaning, waitressing and anything that wouldn’t involve paperwork. I couldn’t read and write properly. I never had the opportunity to learn the basics when I was young. I was too busy being a mother figure to my brothers and father. Now that was going to change.
I was 55 when I went back to education. A friend told me about a Social Care course which I felt suited me down to the ground because of my involvement in the community. I never looked at the contents of the course and never realized how much paperwork would be involved until I started. Essays, reports, exams, everything I used to run a mile from, here it was facing me.
I have to say that the tutors and the VEC were incredibly supportive. The tutors picked up on my difficulties and frustrations and my class also helped me. No-one ever looked down on me. I was never made feel out of place. It was wonderful to be in a group that encouraged me to finish the course, which I did and graduated last year. When I had it all done and finished I was so proud of my achievements.
My new skills and education made me look at myself and my place in life differently. I was no longer the scared housewife stuck at home with no confidence and no skills. Now I could write letters, drive a car and had a qualification. Who was I now?
A very proud woman, I’m working out what my next adventure will be!
NOTE:
Helen was until last year a voluntary board of management member of Navan Community Development Project funded by the Community Development Programme, a precursor to the Local and Community Development Programme. 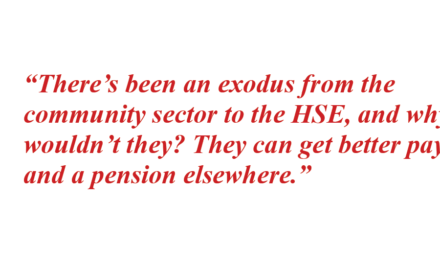