INTRODUCTION TV3’s ‘Darndale, the Edge of Town’ broadcast over three weeks in September presented a touching but sometimes stereotyped picture of the north Dublin suburb, REPORTS ALLEN MEAGHER. Filmed over 12 months, the producers called it an “honest portrayal of Darndale’s residents’ lives” as they followed the day-to-day struggles of a former career criminal, […]

TV3’s ‘Darndale, the Edge of Town’ broadcast over three weeks in September presented a touching but sometimes stereotyped picture of the north Dublin suburb, REPORTS ALLEN MEAGHER.
Filmed over 12 months, the producers called it an “honest portrayal of Darndale’s residents’ lives” as they followed the day-to-day struggles of a former career criminal, a heroin addict and two single mothers struggling to make ends meet.
Ciara Hurley who is from Darndale said the programme did not provide an accurate portrayal of the area.
Her own story is inspirational in what she achieved. She always believed in herself and so did her parents.
Today, Ciara is highly educated and gives full credit to herself – “You have to believe in yourself,” she says. She gives full praise to her family first and foremost and to the Northside Partnership for the support it provided to her and hundreds of schoolkids through its 19-years-old ‘Challenger Programme’.
Recently, she told her story (page 5 across) to a large attendance for the first time at a book-launch (see page 19) by the Irish Local Development Network for which community workers and leaders had travelled from throughout the country to attend.
However, Ciara also spoke up to highlight that much more needs to be done by the State because, as she pointed out,  only 15% of people from Dublin 17 still go onto third level.
The rates have not changed since she was a schoolchild.

If Ciara could change one thing…

– Grateful beneficiary of 7-year-long ‘Challenger Programme’.
– Triple graduate of St. Pat’s, Maynooth & Bath.
– Now back teaching in the area she grew up in.
– Moves to 3rd level “still just 15%” in Dublin 17.
“I’m from Darndale, I’m one of four children and the first in my family to go onto third level,” says Ciara Hurley.
“Both my parents were early school leavers, they came from working class backgrounds, they worked hard all their lives and continue to do so to this day to support us to go to college.
“Growing up in a working class area like Darndale didn’t mean this was unattainable.
“My parents planted the idea very early in my life. I always knew I was going to go to college. Having the full support of my parents both financially and emotionally was one of the biggest factors that added to this success in my life.
“Another factor was the ‘Challenger Programme’. In 1999, I got the opportunity – in my final year in primary school – to join the seven-year programme and break the cycle of low education.
“It gave me a whole range of supports from grind to going to the Gaeltacht and was life-changing for me.
“The programme began a lifelong love affair for me with education… I became a member of a club for people with similar ambitions, we became a support network for each other and my parents met their parents. That was in 1999 and I’m still in contact with many of these friends today. The ‘Challenger Programme’ was about so much more than education, it was a way of life.”
Ciara emerged with an Honours BA from St. Patrick’s College and went onto NUI Maynooth and Bath, England, from where she emerged as a qualified primary school teacher.
“I’m delighted to say I now work in St. Joseph’s National School, Ballybrook, which is one of the five schools where Northside Partnership offer the ‘Challenger Programme’. So things have come full circle.”
“However, when I returned home (from England) I heard about a report from the Higher Education Authority which shows that progression rates into third level education for young people from Dublin 17 is still just 15%.
“As someone who’s came from in the area, has been to college and is now back as a teacher, I hope I can be seen as a role model.
“I know that young people from Dublin 17 are just as talented and have as much potential as young people anywhere else in the country. If they want to go to college – and it isn’t for everyone – (they may choose) to pursue careers that will help end cycles of poverty and disadvantage that effect generations of families in the area.
“In my own life, education has been a powerful influence.
“I’m delighted to be back in Dublin 17 and to have the chance to make a real difference in children’s lives. Sadly, a lot of children will not aspire to go to university – and to be fair it’s not for everyone – but we need more children to consider it as a realistic option.”
If Ciara could change one thing it would be to roll the ‘Challenger Programme’ out for absolutely everyone who wants it in Dublin 17.
“It should be offered to all children in the area,” she said.
On 8th October this year, 154 parents and students turned up for an information meeting about the next rollout of the ‘Challenger Programme’. Northside Partnership organisers describe interest as “huge”.
“Looking back,” said Ciara, “I can see that the supports the programme offered me were very valuable indeed. The programme opened many doors for me and linked me in with the Partnership where I got career guidance and financial support.”
Ciara said however that the support of parents for ambitions children remains “crucial”.

About the ‘Challenger Programme’

The Challenger Programme was set up by Northside Partnership in 1995 to tackle early school leaving and to improve progression to third level education in the Dublin 17 area.
The programme was expanded in 2010 to include two further schools in Kilmore West in Dublin 5.
Today, the Challenger Programme works with five schools located in the Darndale, Belcamp, Priorswood, Bonnybrook and Kilmore West in Dublin 5 and 17, where there is strong evidence of the need for this programme. The programme currently covers an area with a population of approximately 16,000. 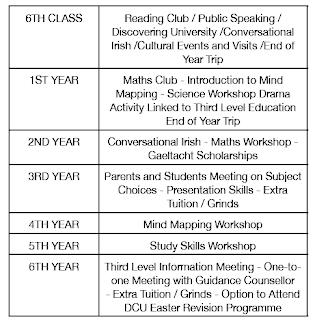 According to the 2011 Census, just 6.5 per cent of adults in the ‘Challenger’ target area have a third level qualification, compared with 30.6 per cent of adults nationally. Similarly, 34 per cent of people in the ‘Challenger’area have progressed no further than primary level education, compared with 16 per cent nationally.
To address this, the programme supports ambitious young people from these areas to stay in school, complete their Leaving Certificate and to go on to third level education.
Students commit to a seven-year programme and receive a range of supports from 6th class in primary school through to their final years in second level. The supports offered range from reading clubs, maths clubs, conversational Irish classes, public speaking classes and grinds in core subjects to cultural trips, Gaeltacht scholarships, visits to universities and individual career guidance.
Parents of ‘Challenger’children must also commit to supporting their child’s education by taking part in a FETAC accredited course.
Over 300 students have completed ‘Challenger’. By last year, 242 participants (80%) had finished their Leaving Certificate and 134 had gone onto third level.

Earn an award – 3 days and the clock is ticking!