Oasis Project 5-a-side team – Winners of Dublin’s Late Night Soccer League Boys known for getting up to far more than mere mischief on the streets of south Dublin are heroes in their communities now, having switched from the streets to become aces on the football field, taking home the champion’s cup. Romy Carroll from […]

Boys known for getting up to far more than mere mischief on the streets of south Dublin are heroes in their communities now, having switched from the streets to become aces on the football field, taking home the champion’s cup. Romy Carroll from Southside Partnership reports: 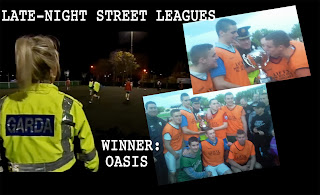 “We’ve done the community proud” said Oasis player Zach Doolin.
“The players gave 110% in training each night” said Dave Hennessy, project worker with the Oasis Project.
A strong and supportive crowd turned out to cheer on the Mounttown Oasis Project’s Five-A-Side Football Team in Irishtown on the day they were crowned winners of Dublin’s Late Night Soccer League, organised by FAI and An Garda Síochána.
“My experience of the late night soccer league was really positive” said Zach, “because it got a bunch of groups to come together every Friday night instead of being in trouble on the streets causing problems. It’s been a great event and it’s given me an urge to get back playing football.”
Oasis began by winning their three group stage matches, went through to a tough semi-final against a strong Crumlin side that ended nil-all, leading to a penalty shootout which saw Oasis emerge 3-1.
The final was an outstanding game. Oasis beat Ballymun 5-4 in a thrilling match from start to finish with nobody giving up until the final whistle.
“When we won the tournament and were crowned the champions of Dublin it was a great feeling,” added Zach. “I think we deserve an emeritus for the hard work and time we put into it and we were all well behaved and we’ve done the community proud.”
An emeritus is a mark of distinguished service and can mean that somebody has “served their time” or “merited one’s discharge by service“.
Does that mean Zach and his teammates wish to retire?
How about holding onto the cup?
“It’s been a great event and it’s definitely given me the urge to get back playing football.”
A fellow teammate said, “It has enticed a few of the lads to take up football full-time. All the players trained hard and were a credit to their communities. Instead of being anti-social on Friday night we got together on the football pitch and put in a lot of hard work and effort. And it saw us through to winning the final.”
He added: “There was great camaraderie between the different communities who came to support each other (during the league).”
Oasis project worker Dave Hennessy noted that the community “pulls together at times like this” and it got behind the players who, in turn, appreciated all the offers of help and sponsorship.
History of the Oasis Project
The Oasis Project was established in 1996 and is a drug prevention/early intervention youth project based in the Mounttown/ Dun Laoghaire area. It operates under the umbrella of Southside Partnership and receives funding through the local Drugs Taskforce.
Oasis provides a safe and welcoming environment for young adults to meet, hang out, watch tv together, play video games and participate in outdoor activities.
Youth Diversion Programme
Open to young people aged 13-21, the street leagues are a diversionary programme that take place in disadvantaged areas during prime anti-social hours such as Friday nights.
Within a year of being launched, over 1,000 young people were involved and the league has continued to grow since 2008.
As well as drawing youths away from anti-social behaviour, the leagues act as “an integration tool” according to the FAI’s Gerry Reardon who said it was normal to have ten or more nationalities playing football on any one night.
Late-night soccer leagues also operate in other parts of the country.
Garda Kate Daly Ní Bhrion of Balbriggan has noted that “in areas where it runs, anti-social behaviour is down 50 per cent.”
The street leagues are supported by the FAI, each of Dublin’s local authorities and the Department of Children and Youth Affairs through its Young People’s Facilities and Services Fund.
Rory O’Hare from the FAI said, “We’ve been running these projects throughout Dublin for the last two years with An Garda Síochána. It’s an attempt to keep young men from anti-social and criminal behavior and to encourage them to build a respectful relationship with the Gardaí.”
Project’s 89% Success Rate.
A 2010 survey showed that 89% of 13-15 year olds participating in the street league said they would be hanging around, drinking or getting into trouble if they were not playing in the Late Night League. 90% of participants aged 16-21 said the same.
56% did not play any other form of organised football in their communities but they saw the Late Night League as an opportunity to keep out of trouble and as somewhere to go.
With 79% of participants unemployed at the time of the survey and not much changed since, the FAI described the programme as being “invaluable” to communities.