“It helped to give me a kickstart in life,” a participant in the Gateway Project said of it. “It gave my life meaning and made me want to make something of it.” Established in Dublin in 2004 as a pilot scheme between the then Rathmines Community Partnership and mental health providers locally, Gateway is one […] 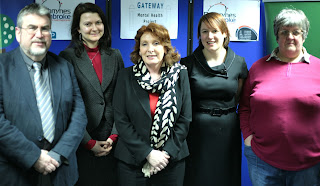 “It helped to give me a kickstart in life,” a participant in the Gateway Project said of it. “It gave my life meaning and made me want to make something of it.”
Established in Dublin in 2004 as a pilot scheme between the then Rathmines Community Partnership and mental health providers locally, Gateway is one of the most successful mental health projects in Ireland.
“The key is integration,” community development worker Martha Griffin said, “giving people autonomy over their own lives and combating the problems of stigma and labeling.”
She was speaking at the launch on February 15th by Minister of State for Disability, Equality and Mental Health, Kathleen Lynch, of a new counselling initiative for Gateway members.
One of the greatest boons of this project, which is based in Harold’s Cross, Dublin, is that its 200 members lead it which ensures that their needs are listened to. The members requested more talk therapies, for instance, and were facilitated by My Mind, a non-profit provider of mental health services, and will receive five sessions each at a cost of only €10 per session. This counselling will assist 85 members.
“For some people it is the stepping stone they need as they have never had access to talk therapies until now,” Ms Griffin noted, “and we don’t ask for details of people’s illnesses. That is voluntary. All we need is a person’s name and address.”
And provisions made available to members include a drop-in facility – a place for people to interact socially, get the information they need (health promotion programmes for instance) and where they can develop personally and practice creative arts.
Members are given support from the Local Development Company to improve their employment prospects, learning for instance how to prepare a CV and approach an interview. They are kept up to date with employment or educational opportunities that might suit them. They publish a monthly newsletter, receive skills-training and take part in social activities, one of which is a creative writing course.
Speaking at the launch, James Foley of ESB’s Electric Aid Programme, funder of the project, said the community-based and member-led nature of Gateway was “what attracted us to it”. He described it as “exceptional value for money as part of the fight against the scourge that is suicide.”
Research into the Gateway’s effectiveness was carried out by its members and the project’s achievements to date are exceptional. 84% of the members say they have greater confidence, 86% say they are more relaxed and 86% find it easier to make friends.
“90% believe it has improved their general wellbeing,” Ms Griffin added, “44% have a lot more confidence, 75% say they get out of the house more often and 45% said that Gateway was responsible for them being in training.”
One member described it as “informal – everyone is on the same level”. Another said of Gateway that it provided them with “self confidence, higher self-esteem and belief in myself”.
Minister Lynch is an advocate for the programme: “The days of only listening to the medical model are over,” she said. “There seems to be an endless stream of courses, which aren’t really focused enough. In Gateway, the participant guides the service.”
She was invited, said Ms Griffin, to highlight that talk therapies that are available to Gateway members because of the new initiative are “not only a need in this community but nationally.”
– The “embodiment of government policy on mental health”

In her address, Ms Griffin asked Minister Kathleen Lynch to “ensure that community based social projects like Gateway receive sustainable funding as it is a model that is proven to work. It is an inexpensive model that yields results as our research shows and it is an embodiment of the government policy ‘A Vision for Change.’”
The Gateway project came about in Rathmines because there are a number of mental health hospitals and daycentres in the area and there were “a large number of people who had self experience of ill mental health living in the community.”
It began as a one-day-a-week pilot programme in a house in Governor Road. The stakeholders wanted something that was different to the medical model, that was locally based and that was not structured around courses.
Gateway works from community development principles whereby people have autonomy over their own lives and recognises they have the insight and knowledge to change things for themselves.
In her address on Feb. 15th, Ms Griffin reminded guest speaker Minister Lynch to ensure the Government’s commitment was honoured to spend €6 million of HSE funds in 2012 “to roll out access to talking therapies through primary care for people on medical cards” and to increase the number of staff on adult community teams by 220 personnel.
What are Talk Therapies?
Talk therapies is where a client works with a professional and speaks about issues, behaviours, patterns, feelings and emotions.
Talking therapies is also the general name for the range of psychotherapies on offer to people. The term covers psychoanalysis, cognitive behavioural therapy, and counselling or counselling psychology approaches.
The person chooses which therapy they want.
Depending on the approach it can be a short or a long processes. For something like dealing with child abuse as an adult it can take many years. Cognitive Behavioural Therapy seems to be the ‘in’ approach at the moment in Ireland.

Ex-prisoners turning their lives around in Ferrybank

Cut to Back To Work Allowance “a concern”