Citizens fill in where there are no staff in West Cork By Robert McNamara Three community led job-seekers centres, staffed by volunteers, are currently operating in the West Cork area, with plans for three more to be opened. Only for them, unemployed people in West Cork would be left to swim. The centres which offer […]

Citizens fill in where there are no staff in West Cork

By Robert McNamara
Three community led job-seekers centres, staffed by volunteers, are currently operating in the West Cork area, with plans for three more to be opened.
Only for them, unemployed people in West Cork would be left to swim.

The centres which offer free advice and confidential support in Bandon, Kinsale and Clonakilty are managed by the West Cork Development Board (WCDP) and offer a “holistic” approach to job-searching. A “buddy” system operates, with volunteers assisting the job-seekers in all aspects of the process.

The centres serve a region that comprises of eight mid-size towns, which currently have approximately 10,000 people on the live register. There are no Local Employment Services Offices, or Jobs Clubs, and only 9 per cent of the territory is covered by Local Development Plans.
LCDP manager Fergal Conlon believes that the centres are an essential resource for those looking for work. “They are hugely important because without job-seekers’ centres, a job-seeker would have nowhere to go and no-one to get advice and support from and they’d be left on their own and isolated.” 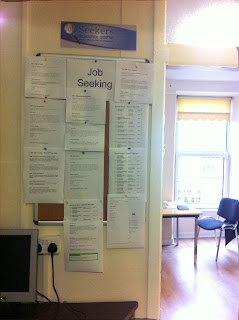 Karen Moroney is a volunteer at the Clonakilty centre: “We talk to people and assess what their needs are and support them through that. Some people may have been with the one employer for a long time and maybe wouldn’t know how to put a CV together, so we help them. If they want to delve in further and go through the programme that we offer, then we can do that as well”.
The centres mimic the approach of Citizens Information Services by allowing volunteers to deliver information and advice via IT tools.
“They provide volunteers at the front-line to deliver support in a complex area and they’re dealing with complicated information. So in that sense we’re trying to copy them in some ways with a job-seeking twist obviously”, said Fergal.
The idea for the centres grew from an existing website service by the WCDP (www. westcorkjobsupport.com) that offered a range of job-seeking tools and resources. The website proved popular, but ultimately failed to reach out to those not IT savvy .
Three more job-seekers’ support centres are now planned.
“We’re immediately looking at the towns in Macroom, Skibereen and we’ll be considering Dunmanway and Castletownbere later in the year aswell”, Fergal confirmed.
The centres offer a wide range of advice in areas such as rights and entitlements, career decision-making, CV and interview preparation, options and sources of training, course information, identification of job-seeking techniques through networking, publications and the internet, and development of a personal strategy for pro-active job seeking.
Broadband and printing services are also available at the centres.
And every one of the centres depends on volunteers continuing to step forward.

Update in relation to former CDPs and the LCDP