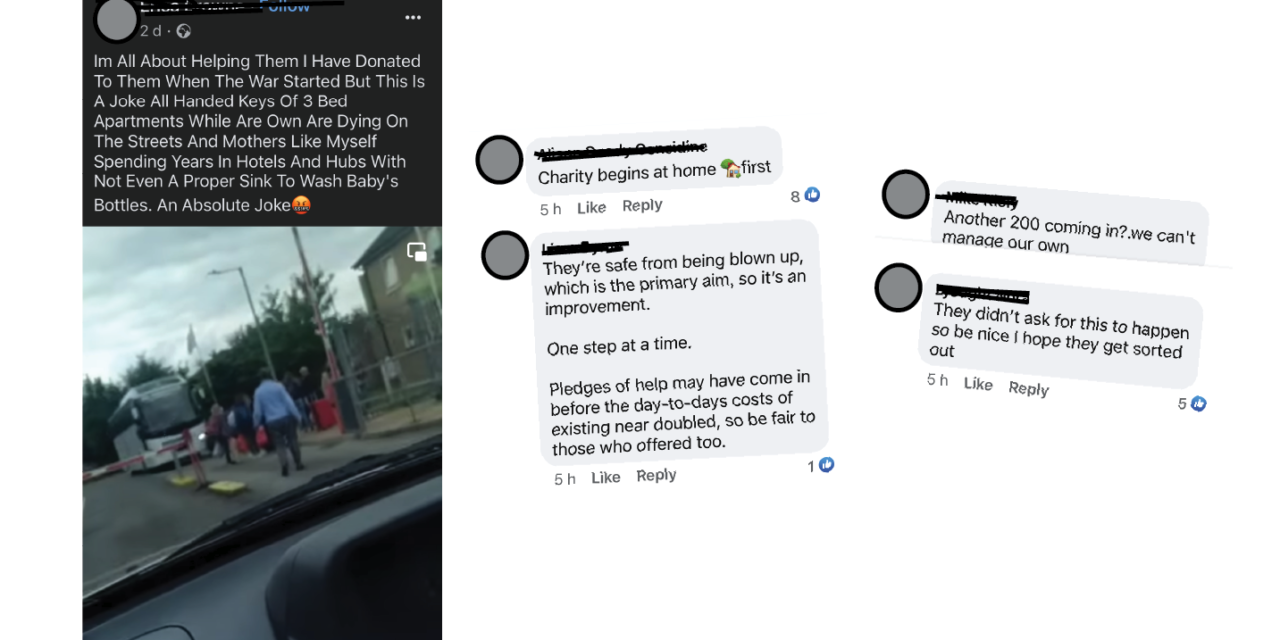 The welcome towards Ukrainian refugees is not as universal as it was in February, as shown by hostile comments from Irish people regarding refugees who were living in tents in a recycling centre.

(Those refugees have now been moved to student accommodation for the summer, after which time they will be moved again to who knows where.)

The story they commented on was published by a reputable local newspaper and the ensuing discussion on Facebook was among local people commenting under their real names.

Alison, who only last February sported a Ukrainian flag on her page, responding to news about the refugees being given accommodation wrote: “Charity begins at home”.
She got 12 likes.

The majority of people showed they care, some preferred to put their own interests first, many blamed the government and others are of course only online for a laugh.
Derek replied to the tents story saying: “They’re used to the cold being from that area.”

Martina saw a bigger picture: “It’s the government’s fault they should never have brought them people in here when they haven’t their ‘house’ in order. Our housing situation is a disaster & the government is making the Irish resent these people & it’s not their fault, they were running from a war.”

Nora agreed with her: “They didn’t ask for this to happen, so be nice. I hope they get sorted out.”

But Tom was having none of it: “Every time a ‘refugee’ gets somewhere to live that’s a place an Irish family could have had.”

Back and forwards the argument went. People are well informed about the housing crisis – or disaster as President Higgins terms it – and some spoke from personal experience.

Paul was swamped with 37 likes when he said simply: “I’m a proud Irishman and this country doesn’t care about our own people.”
John replied: “The homeless crisis and our humanitarian obligation to refugees are two completely separate issues… It’s not a triage situation. Must do both. We don’t do enough for either.”
He received 26 likes.

Such online debate on Facebook – mostly between people living in the same place – can be healthy. However, when misinformation creeps in, people can lose the plot

An Erica raised the temperature with a video she shared showing Ukrainian refugees who she said were given “the keys” to 3-bedroom apartments. She posted a few seconds of video (seemingly from another part of the country) of people alighting from a bus outside student accommodation. The commentary said: “About 100 Ukrainians handed apartments down here. An absolute joke and our own on the streets in town, men and all there.”

Many took it that the refugees were all but housed for life.
“A disgrace.”
“Scandalous.”
“Disgusting.”
“Can’t help our own – leaving ‘em to die.”

Erica wrote, “I’m all about helping them. I have donated when the war started, but this is a joke. All handed keys of 3 bed apartments while our own are dying on the streets and mothers like myself spending years in hotels and hubs with not even a proper sink to wash baby’s bottles. Absolute joke.”

The joke will be on us all with rising racism. The government needs to better communicate to the general public that Ukrainian refugees – while they are entitled to social welfare, medical care and access to jobs – DO NOT qualify for social housing. This should be widely broadcast in the same way that Covid alerts and health advice was issued.

Some of the more unsympathetic messages posted in the same online discussion included:

Jack: “Send them back now it’s safe the capital Kiev. This is shocking but it’s all the government open door policy while poor Irish are forgotten.”

Lisa: “I’m not racist, but you’ll get better treatment if you paint your face or speak a different language – you’ll be treated like kings and queens.”
And, as so often in online debates, there were the conspiracy theorists.

Barry wrote: “This was all designed and purposely done. Stop this nonsense over their fake war. I’ve been researching this sh** for years. Wake up people.”

Danny was right with him: “None of these Ukrainians are fleeing war-torn countries. We are being lied to. They are pulling up outside *** school in €60,000 cars and jeeps dressed up to the nines in designer gear, all the whilst our own indigenous are being kicked to the kerb.”
Would he be more welcoming to refugees who come with only a backpack as many have done?

This reaction to one innocuous news story and a flimsy amateur video with misleading commentary, is no doubt being replicated in other parts of the country. When the facts are fairly reported, it can lead to healthy debate, but when facts are grey it leads at best to misguided outrage and at worst to racism.

Obviously, Ireland must look after existing public needs and war refugees fairly (and what about non-Ukrainians refugees?) and communicate clearly what the facts are. In the meantime, community workers and local public representatives must work on integration while facing a possible rise in intolerance.

One hopes Ukrainians who come across online discussions like this can disregard the negatives and embrace the positive. 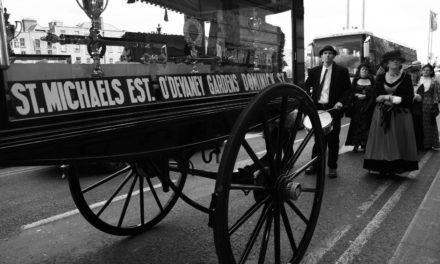 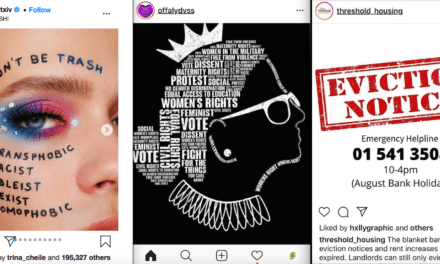 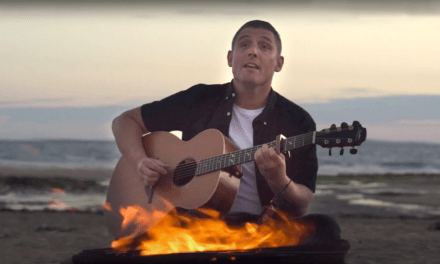