Offaly makes a start – as 5 people get a start

BY ROBERT MCNAMARA A programme supporting those at risk of social exclusion has, in the past few months, helped 55 long-term unemployed people move towards paid employment in Co. Offaly. Five of the people who last December completed the 16-month programme gained full-time or part-time employment, five more found seasonal work and most of the […] 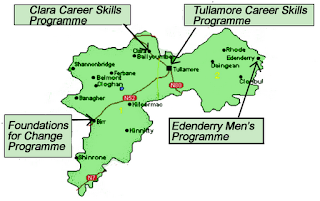 BY ROBERT MCNAMARA
A programme supporting those at risk of social exclusion has, in the past few months, helped 55 long-term unemployed people move towards paid employment in Co. Offaly.
Five of the people who last December completed the 16-month programme gained full-time or part-time employment, five more found seasonal work and most of the remainder went onto advanced courses and programmes.
They had all been long-term unemployed.
‘The Way Forward Project’ reached people through locally respected community workers and it helped each person to build up confidence, knowledge and basic education so they had a better chance of landing a job. A third of those who joined the programme had seen their formal education end at the Junior Cert and were out of work during the ‘boom’ and finding it even more difficult now.
“I’d got into a rut at home,” said Michael Egan who is now at FETAC Level 5 and much more confident.
Breda Stewart, LCDP programme leader in Offaly,believes that focusing on personal development and giving the participants a say in the course contents was essential to its success.
“The core elements focused on self-development, self-awareness, career exploration, support and mentoring,” she said. “It’s about helping each person to identify and develop their innate abilities and thereby develop confidence in themselves. Then they begin to see realistic routes they could take towards the labour market.”
Only one in five people in Offaly have a third-level education – well below the national average – and nearly half the county’s population left school before doing the Leaving Cert, according to 2006 CSO figures.
The participants chose DIY, painting, gardening, budget and financing and stress management, among others, as practical elements. Core elements of the programme included team-building, communication, IT skills, career options and planning.
Among the 55 participants on the course, 47 were male, 8 were female and there was a good spread in age-groups. They met three mornings a week from September 2010 to December 2011 in local groups of seven-to-10 in various locations.
“So far, five were fortunate to find jobs, but so many more have taken part in further education, training, volunteering and a whole range of activities that all strengthen people’s skills and chances of finding work in the future,” said Breda.
This year, there are another 60-70 people taking part in courses under an Offaly Education programme that has since been developed with the VEC and Department of Social Protection.
Breda said it was “a concerted effort to address the issue of low educational attainment among early school leavers or unemployed people in the county”. The latest rollout again allows participants to tailor it to suit their needs.
“Apart from a small number of core modules, the prospective participants again design the programme, identifying the modules they want to complete,” said Breda.
•            Six programmes commenced in various locations between March and April, aiming to be completed by June or July.
•            The expectation or hope is that many of these participants will progress on to further programmes at higher FETAC levels in September.
W: www.offalyldc.ie