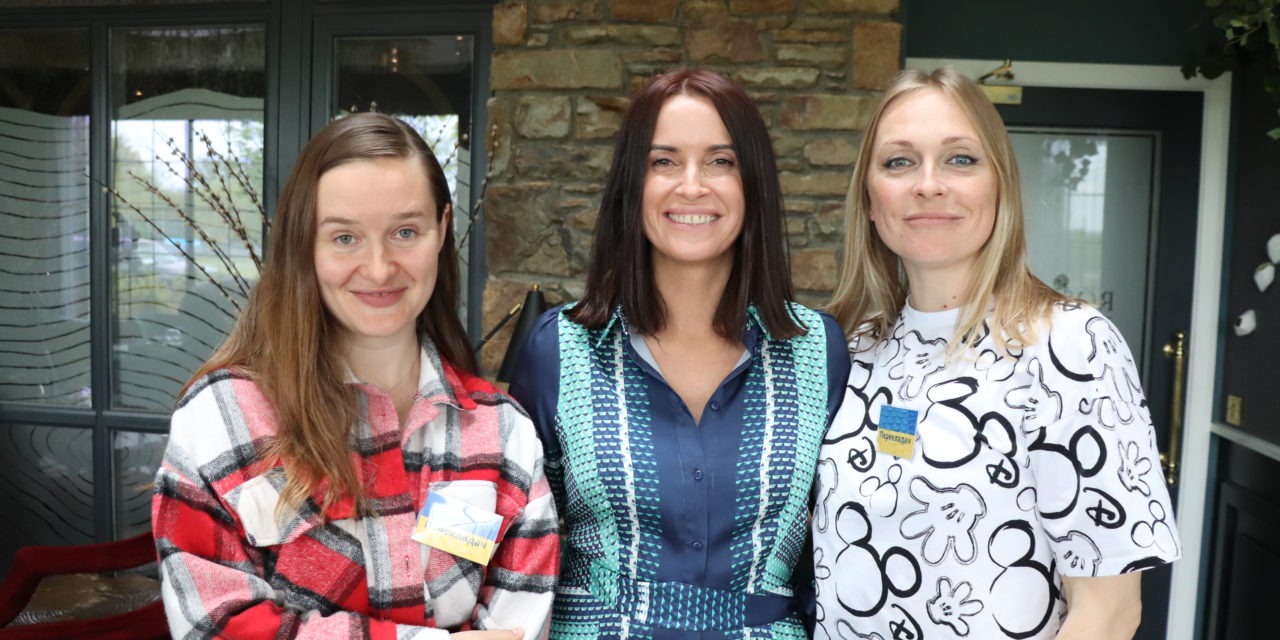 Up to half the 600-plus people who attended a jobs fair in Co. Kerry on Monday were refugees or asylum-seekers. Interviews for some took place on the spot and employers, job-seekers and the organisers – focused as they are on integration – rightly declared the event a success.

– Every employer we spoke to found suitable people

Refugees Olya Marymtseva and Olena Syniuenchko are both staying at the nearby Earl of Desmond Hotel and served as translators on the day. Olya is one of the first Ukrainians to get a full-time job here. She is now employed by Kerry Education and Training Board.

“Hope is what we got from today. I saw job interviews take place in front of my eyes. And I was sitting on the floor with a laptop working for Kerry ETB,” she said.

Olena Syniuenchko came here at the end of March and Monday marked her first day doing paid work in Ireland.

“I’ve been speaking on behalf of the Ukrainian community and today I’m being paid to be a translator,” she said. “I’ve lots of qualifications to be honest. I’m looking for something in project management and business analysis in the IT sphere, but I’ve also got a masters in international law. Today was super-useful. People are so happy to be here and look into all the job opportunities.”

The refugees from Ukraine and other countries and members of the general public met 30 employers at the event which was organised by North East West Kerry Development (NEWKD) in collaboration with the Kerry Chambers.

‘Changing Ireland’ was present to see the stands with hundreds of jobs on offer in technology, office admin, accounts, hospitality, food production, tourism, health and more.

Event co-coordinator Lisa O’Flaherty, who works with NEWKD’s ‘Moving On’ employment project, said they used software to prepare people for the event – so they knew in advance roughly what people were seeking, or whether they preferred training or education to employment.

Jennifer O’Sullivan, whose work with young people who are unemployed is supported through the Social Inclusion and Community Activation Programme, was delighted the event attracted a diverse group of people.

“Our work is very much about equality and it was great to have such an inclusive event. We organised buses and translators for Ukrainian refugees and it was great to be able to connect them with employers,” she said. Asylum-seekers and refugees living in a nearby Direct Provision centre were able to walk to the venue.

As Jennifer said, “NEWKD are part of the Kerry Community Response Forum facilitated by Kerry County Council which is supporting Ukrainian refugees. They are anxious to work and work is a key part of integrating into society.”

Online webinars, including about employment rights, are to follow the jobs fair.

Breda Flaherty, HR manager with Dairymaster said her farm technology company was doing well and had 30 to 40 vacancies.

“We’re very proud of our moo-monitor which is a fitbit for a cow,” she said, listing vacancies in engineering, software, welding and much more.

“Our international sales manager is Ukrainian and we translated our list of vacancies into Ukrainian and we received a substantial number of applications,” she said. She also met refugees staying in the Earl of Desmond Hotel and her company is willing to train people who are interested in working for her company.

Breda, who served until recently on the board of NEWKD, was very impressed as a business person by the event:  “It’s by far the best jobs fair I’ve been at and I’ve been to a lot in my time – in Dublin, Cork, Limerick and so on. This was the best set up. There was a great flow of people all day who were genuinely interested in the positions.”

Jane O’Loghlen, owner of Bridge Place Dental Practice, was “shocked” to meet the very people with a particular skill-set that she was looking for.

She said, “I got to meet face-to-face with lots of prospective employees. It was really beneficial to have that one-to-one conversation.” She expects to hire some of the people she met at the jobs fair.

From a job-hunter’s point of view, It was also great to get that face-to-face. Lisa O’Flaherty normally works with NEWKD’s ‘Moving On’ employment project and was the lead organiser. She said:

“People really appreciated the opportunity to talk face to face with employers. It can be difficult to make a direct connection with an employer so we were happy to be able to remove some of the barriers.”

Among the employer stands were a couple of recruitment companies. Staff from FRS recruitment also market an app called ‘Gettheshifts’ which offers hourly shifts working in hospitality, offices, cleaning, industry and marketing. They currently have shift work coming up at big music events in Killarney.

Sam Driver, with FRS in Cork, said they were able to match some of the refugees who were better able to speak English with positions and they can proceed to submit CVs for those roles. He said other refugees they met who face the language barrier were “more suitable” for roles with ‘Get-the-shifts’.

Aoife Mortell, also with FRS in Cork, said, “I don’t think anybody passed our desk without dropping their name or email address.”

Nathan Adams from FRS in Dublin said it was great meeting people face-to-face, having a chat and “seeing where people are at in their life right now and where they want to go.”

The organisers used technology to link with the refugees in advance of the event.

Said Lisa O’Flaherty: “We sent them a link asking them what work they did at home and what would they like to do here. We asked: ‘Are you looking for work?’ and if you answered ‘No’ you were brought to another part online. If they answered ‘Yes’ it led them on to other work questions.”

Rob Carey, social inclusion manager with NEWKD, said: “We were reacting to a need. Through work by my colleagues and others, it became apparent the Ukrainian refugees are very anxious to work. We wondered was it a bit too soon, but they have a big desire to get employed. They see it as a way to integrate into society and to get their own place.”

“We are going to do follow-ups with people who didn’t get what they wanted today,” he said. Prior to going through data collected on the day – they both estimated that between 40% and 50% of attendees at the jobs fair were refugees or asylum-seekers.

Lisa Fingleton, who also works with NEWKD’s ‘Moving On’ project, interviewed and filmed employers about their recruitment needs and this footage will be made available in a webinar over the coming weeks.

“There are still opportunities for those who couldn’t attend on the day,” she said.

The jobs fair was funded through NEWKD’s ‘Moving On’ employment project and the Social Inclusion and Community Activation Programme (SICAP). Moving On is  co-funded by the Irish Government and the European Social Fund as part of the ESF Programme for Employability, Inclusion and Learning (PEIL) 2014-2022.